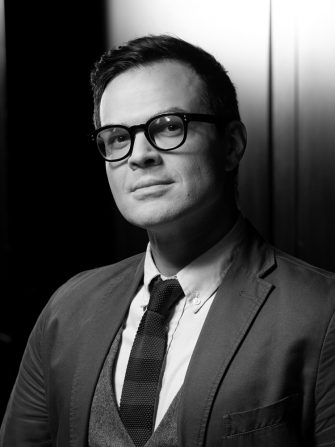 A graduate of the Secondary State Music School in Bialystok in Prof. V. Bielecka’s class, and the Vocal Faculty of the Fryderyk Chopin Music Academy in Warsaw (diploma with honours). He collaborated with many outstanding artists, chamber musicians and directors. Since 2000, he has been performing solo parts at home and abroad, often giving performances of contemporary music. Currently, he records and gives concerts with the Hashtag Ensemble. He has also participated in contemporary music festivals, including the International Crossdrumming Festival, the Warsaw Autumn International Festival of Contemporary Music, the Sacrum Profranum in Krakow, the Klang Festival in Copenhagen, the Aujourd’hui Musiques Festival in Perpignan, Flâneries Musicales in Reims and Novelum Festival in Toulouse. In 2009, the artist made his debut at the Grand Theatre—National Opera in G. Donizetti’s “Lukrezia Borgia,” to return to his home stage in I. Xenakis’s opera “Oresteia.” In 2010, he made his debut as Schaunard in G. Puccini’s “La Bohème” on the stage of the Grand Theatre in Poznań. He collaborated with L.T.L. Opera Studio (Laboratorio Toscano per la Lirica), Theatre de L’Archipel in Perpignan, National Philharmonic in Warsaw and “Capitol” Musical Theatre in Wrocław. On stage of the Cracow J. Słowacki Theatre, he played St. Sebastian in “Father” directed by A. Duda-Gracz with J. Ostaszewski’s music. He has been playing Pilate in A. Lloyd Webber’s “Jesus Christ Superstar” four seasons in a row in the Rampa Theatre in Warsaw. On the stage of the Podlasie Opera and Philharmonic, he appears in musicals: Ch. Williams’s “Korczak” (Izaac), A. Lloyd Webber’s “The Phantom of the Opera” (Richard Firmin), J. Bock’s “Fiddler on the Roof” (Perczyk and Mordka), and L. Simon’s “Doctor Zhivago” (Liberius and Gints); in operas: G. Verdi’s “Traviata” (The Baron), W.A. Mozart’s “The Magic Flute” (Papageno), G. Bizet’s “Carmen” (Moralès), and G. Puccini’s “Turandot” (Mandarin); in operettas by J. Strauss: “Die Fledermaus” (Dr Falke) and “Gypsy Baron” (Janosz, Homonay), and musical fairytales “The Ugly Ducklet,” “Adonis Has a Guest,” “The Case of the Little R.R. Hood” and “The Jungle Book.” He also appears in B. Schaeffer’s “Quartet for Four Actors” (dir. M. Tyszkiewicz). The album featuring “Symphony No. 4—Symphony on the Mercy of God” by P. Łukaszewski, in which he performed a solo part, won the Fryderyk Award (Contemporary Music Album of the Year 2017).