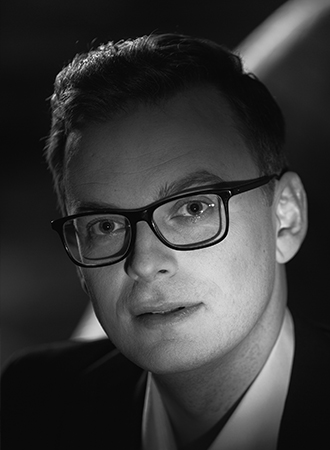 Graduate of the University of Białystok at the Law Department. In 2007 he finished prosecutorial application. In 2012 he graduated with honours from vocal studies at the Fryderyk Chopin University of Music in the Department of Instrumental and Educational Studies in Białystok, in the solo vocal class of Cezary Szyfman. He mastered his vocal skills on master class and seminars held by: Leonard Andrzej Mróz (2008), Urszula Krygier (2008), Igor Perfilyev (Russia, 2010), Józef Frakstein (2011), Jolanta Janucik (2012), Jadwiga Rappé (2012), Ryszard Karczykowski (2012) and Andrzej Dobber (2012). In August 2010 he held a finalist award of the 10th National Vocal Competition in Duszniki-Zdrój in oratorio-vocal category. Moreover, he won a Regional Competition of Hetmanowa Izabela Branicka (Białystok, 2010). Mr Szyfman took place in numerous concerts organised by Podlasie Opera and Philharmonic, Symphonic Orchestra of Toruń, Chamber Orchestra of Suwałki. Since 2006 he is an artist of the Podlasie Opera and Philharmonic. Since 2010 Mr Szyfman cooperates with early music group Diletto, with which he performed solo parts of: Aeneas in H. Purcell’s “Dido and Aeneas” (concert version), bass part in H. Purcell’s “Ode to St Cecilia” and bass part in oratorio G.F. Händel’s “Messiah”. In May 2011 he had his debut role in the Puppet Theatre in Bialystok as Earl Almaviv in a student production of W.A. Mozart’s “The Marriage of Figaro” directed by Paweł Aigner. Since 2012 he is taking part in tutoring programme for talented musicians, Opera Academy, organised by the Grand Theatre–National Opera in Warsaw. In 2013 he debuted in National Opera as Marullo in G. Verdi’s “Rigoletto”.