Unique story of a Polish nun, sister Faustina, canonised by the pope John Paul II, who was a mystic and a visioner and whose life was devoted to accomplish an important mission. The movie will show facts unknown to the public and the beginnings of the Divine Mercy devotion, now popular all over the world. The character of Faustina will be created by Kamila Kamińska—awarded for the best debut performance at Gdynia Film Festival, star of the movies “Breaking the Limits” and “Letters to Santa 3.” “Love and Mercy” also stars Maciej Małys—who played alongside Jon Voight in the “Pope John Paul II”—and Janusz Chabior, known from “Wolyn.” The director is Michał Kondrat, who directed “Two Crowns” about the Polish Fr. Maximilian Maria Kolbe.

Peaceful and dictated by faith, the life of sister Faustina Kowalska one day changes suddenly. She sees a vision of Jesus Christ, who assings her with a mission to preach the truth about His Mercy and to prepare the world for His Second Coming. It seems impossible to realise, but she will do everything in her power to do so. Today new proofs come to light that the sister was in fact seeing Jesus. The scientific resarch showed that the apparition of Christ from the painting she commisioned is identical to His face and silhouette seen on the Turin shroud. Her activity gave rise to the Divine Mercy devotion, now celebrated by millions of people all over the globe. The extraordinary meeting of Faustina and Jesus was acknowledged by many popes, among them John Paul II, who canonised her April 30, 2000 and established the Feast of the Divine Mercy, which, during the apparitions, Jesus told sister He wanted. 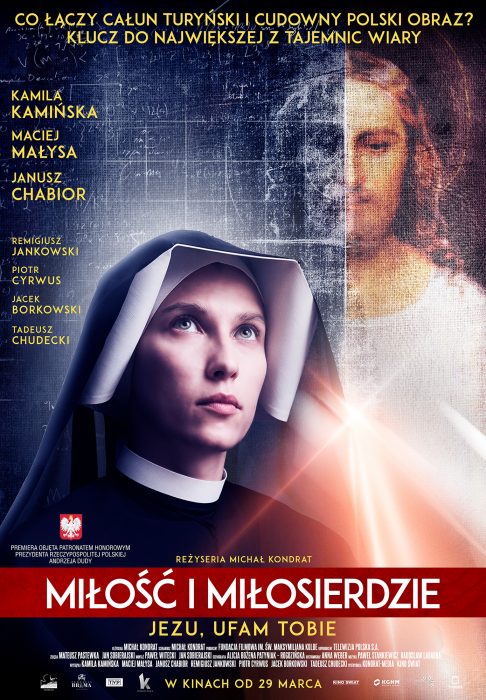 Czas trwania 120 min
Język Polish
Cena biletów 50 PLN
Miejsce wydarzenia
This website uses cookies to ensure that we give you the best possible experience. If you continue to use this website, you consent to the use of cookies by the Podlasie Opera and Philharmonic. Detailed information regarding the personal data processing and the cookie policy are to be found at Protection of Personal Data & Privacy Policy tab.